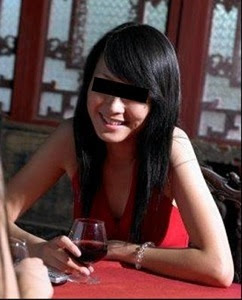 As an agent it is my duty to find new talent that I can develop into the next big Hollywood star.

I recently got a head shot of a local model and thought she might have what it takes to make it in this rough and tumble business. I checked out her myspace and deduced that she had the body of a talented actress.

She came in for a reading yesterday. I had Walter record it. Yes, look at that, I’m using my assistant’s name. I feel like the new Mother Theresa except I’m much more attractive.

After watching her audition tape on mute, I realized I needed a more in depth interview. At dinner she told me about all of her goals… you know, to do a “important film that will open people’s eyes to the tragedies of blah blah blah.” Anyways, I told her I was deeply moved and considering signing her. I told her I was still unsure of her acting ability.

I had an epiphany after we woke up the next morning. We got dressed and I told her I decided to take her on as a client. She started to cry. Who wouldn’t? When I sign someone it basically ensures that they will become wealthy and at least make it to the C-List.

I worked a miracle and got her a job after only one day of agenting. My new client has a strong role in “Undercover Sorority.” It’s a character study of a woman living a double life as a promiscuous college student and FBI agent. It will take some real courage for her to tackle those tough sex scenes. She’s up to it.

I love when I can make dreams come true. I hate to get cheesy or sentimental, but it’s why I was drawn to this business. You’re welcome, new client.

Posted by Important Hollywood Agent at 8:35 AM