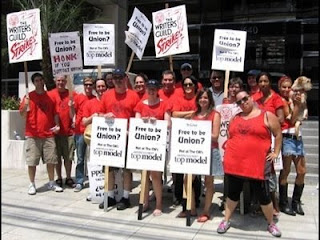 As we all know, the center of the universe (Hollywood), has a strike brewing. In public I must feign I’m a liberal that supports the strike.

However, the writers will lose the strike. Why? Because they have no power. How hard is it to fill up a few pages with words? Answer: Not very.

My agency is talking about cutting assistants. God knows how I’ll react if I have to get my own coffee and answer my own phone. I will march down to the WGA and punch the strikers in the face. How selfish can these people be? I must get my own food and drink simply so they can make more money? I only take 10% of my client’s pay and my job is at least twice as hard as theirs. Honestly, dialogue is overrated.

Yesterday I had a meeting at Paramount Studios. I saw the picket line as I approached the studio. I know they are writers, but for god’s sake, they should join a gym or at least get a better wardrobe. They were trying to be intimidating but let’s be honest. Writers are not scary. They look like they just came from a World of Warcraft convention.

I tried to drive onto the lot, but one pudgy writer would not move out of my way. I politely honked for 30 seconds, but the fat writer turned to me and started chanting. His chant was lame, “What do we want? When do we want it?.” You’re a writer! Think of something funny to chant. I prefer to be entertained when being subjected to a strike.

I gently nudged my car into the writer’s legs. He transformed from an unattractive writer to unattractive MAD writer. He moved out of the way. As I sped off he threw his sign at my BMW 740i. The sign grazed my car, causing an insane amount of damage. A small scratch on my car! I was already late for my meeting or else I would have gone after him. Or at least sent Walter after him. The scratch on my BMW is evidence that it is not only the writers that are paying the price for the strike. I hope the writers resolve the situation soon because we are all paying the price for the strike.

On a side note, the owner of our agency cut the health insurance for all our assistants. They should feel lucky. Many assistants are being laid off. At least they got to keep their jobs.

Posted by Important Hollywood Agent at 8:40 AM